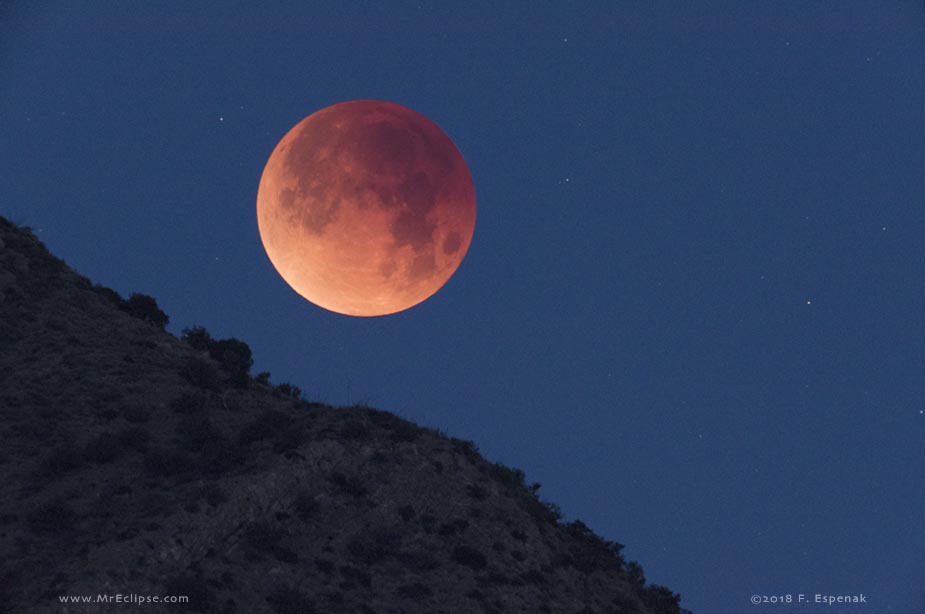 As mentioned before, from a misinterpretation of the tradition (Ref.1), since 1946 the second Full Moon in a calendar month has been called "Blue Moon". The history of this has been discussed extensively at the occurrence of a double "Blue Moon" in 1999 (Ref.3). One 19-year cycle later, in 2018 there was much media interest in the "super blue bloodmoon" of 31 January, and the story was retold. Besides being a "Blue Moon", this was also a "Super Moon" and a "Blood Moon".

The latter term refers to a total lunar eclipse, when the Moon turns orange to brown red as it passes through the shadow of the Earth: only light refracted by Earth's atmosphere reaches the Moon, but short-wave blue light is scattered and mostly red light remains to illuminate the Moon.

A lunar eclipse occurs when the Moon passes through the shadow that the Earth casts in the light of the Sun: i.e. when the Moon is in opposition to the Sun as seen from the Earth, i.e. at Full Moon. For an eclipse to occur the alignment must be near perfect, so this only happens when both the Moon and the Sun appear near to the intersection of their orbits: the nodes. The Moon passes the nodes twice every 27.21 days (draconitic month), the Sun twice every 346.62 days (eclipse year): so there is an occasion for a lunar eclipse at Full Moon about every 173.3 days. Eclipses recur after a period of 223 lunations (called a saros), which is 18 years and 11 days. Within a saros period there are 26 partial or total lunar eclipses.

A "Super Moon" is a Full Moon that appears extra big and bright because it occurs when the Moon is near its perigee (the point closest to Earth in its elliptic orbit). At perigee the Moon is 11% closer and 23% brighter than at apogee (farthest from Earth). The period of its elliptic orbit (anomalistic month) is 27.55 days. The beat period with the synodic month of 29.53 days is 411.78 days, which is about 14 lunations and 15 anomalistic months: so every 14th Full Moon is a "Super Moon".

Blue Moons in the calendar sense occur 8 times in 19 years. If there is no Full Moon in February, then there must be one at the end of January and at the begin of March. But these months have 31 days, while a lunation only lasts between 29.26 and 29.80 days, so there also must be a Full Moon at the beginning of January and at the end of March. So both of these months have a Blue Moon in years when there is no Full Moon in February. Therefore there are not 7 but 8 calendar Blue Moons in the 19-year cycle. The double Blue Moon occurred in 2018, and before in 1999, and again in 2037.